We very rarely buy or eat any processed food, and choosing instead make most things from scratch. But breakfast gave me lots of cause for thought, as my children love cereal.  As most other Mums I am in a rush in the mornings,as my girls go to a school eleven miles from our home. So cereals on a school morning were fast and convenient.
I tried to choose healthy option cereals, but my kids always wanted the type that are marketed at them.  Either those or the very expensive diet version of cereals that contain  the freeze dried fruit, if I bought that type I could easily spend £8.00 a week just on cereal. It wasn't just the cost that I was concerned about I was also the amount of sugar, preservatives and general junk that they were consuming.  After eating cereals the children were never full for very long, and would want snacks before lunch.
So in August of last year I stopped buying cereals, with the hope that by the time that the kids went back to school in September I would be up to speed.  We have experimented with lots of different recipes and ideas. I made breakfast muffins that contained different seeds and dried fruit, I thought these were yummy but my middle child acted like I was trying to poison her. The fantastic thing was that these frozen and de-frosted beautifully, making them a brilliant back up.  The standard mid week breakfasts are now yoghurt, fresh fruit, wholemeal toast with homemade jam and porridge. When I have more time we made crumpets, American style pancakes, and cinnamon buns.  When Mr Sunflower Gal is home he likes a bacon sandwich, poached eggs, or the occasional full English for brunch.
As I said at the start of this post we made most things from scratch,  however I do like bargain. When I see English Muffins, broche, croissants or pain au chocolate reduced  I do buy them for a treat, who could resist a Broche loaf for 19p?? Yummy toasted with some homemade jam. Below are homemade Cinnamon buns, shout if anyone would like the recipe. 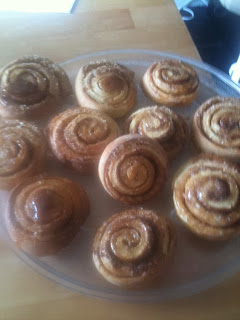